Happy Thanksgiving, Canadian friends! Right now I'm thankful for the long weekend -- time to do a little catching up, with posting my Boston photos being at the top of the list. 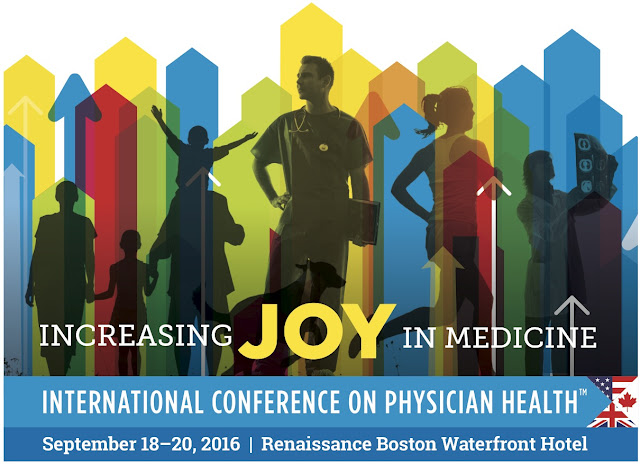 I was very fortunate to receive some funding from our provincial residents' association to attend the International Conference on Physician Health (ICPH), a three-day conference in Boston last month. This biennial conference is sponsored by the Canadian, American, and British Medical Associations, who rotate hosting duties (next up is Toronto, for ICPH 2018).

Getting to the conference was a little bit hectic: our Banff radiation oncology conference ended on a Saturday afternoon, we made the four-hour drive back to Edmonton, I had 30 minutes at home to repack my backpack, and headed out to the airport to catch the red-eye via Toronto to Boston. But all went smoothly and the next morning I was standing in Logan Airport in Boston. I took the bus to the conference hotel, changed in the bathroom, stored my backpack, registered, and slipped (just a little bit late) into the first conference session.
The next three days were filled with wonderful plenaries, workshops, research presentations, and poster sessions, on mindfulness, meditation, mental health, resiliency, burnout, compassion, and gratitude, centred around this year's conference theme, "increasing joy in medicine".
I really enjoyed most sessions, and found a couple to be particularly inspiring. I took a lot of notes. I won't bore you with everything, but here are some quick takes:
Thanks to spending the first night on the plane, my budget stretched to cover two nights in the conference hotel, the Renaissance Boston Waterfront, which was just beautiful.

It was my first time visiting Boston and I wanted to see as much as I could over the two evenings. The hotel was just a few steps from a bus stop, so I bought a transit pass and took the silver line bus and subways ("The T") around the city. The transit system was great -- so quick and easy to navigate -- and provided a glimpse of what it might be like to be a local.

The first evening I walked to South Station, passing the Boston Tea Party Museum, which I didn't pay 23 USD to enter, though did stand on the bridge for a bit to watch the actors throw chests of tea off a replica ship. 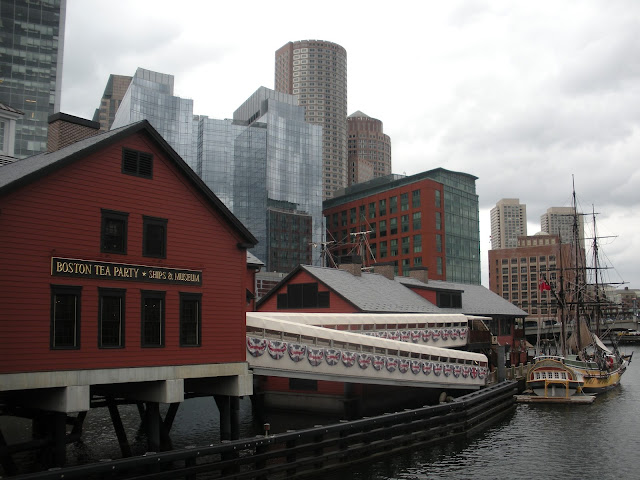 I took the red line to Cambridge to visit MIT and Harvard. I didn't do a tour of either, just walked around with a map. MIT has some interesting architecture, most notably the Strata Center. 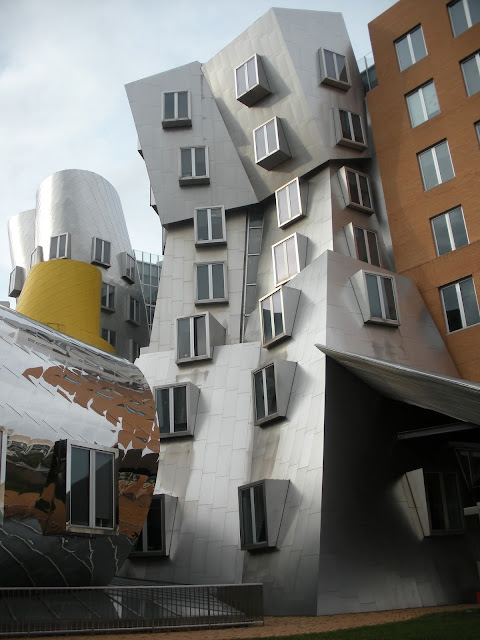 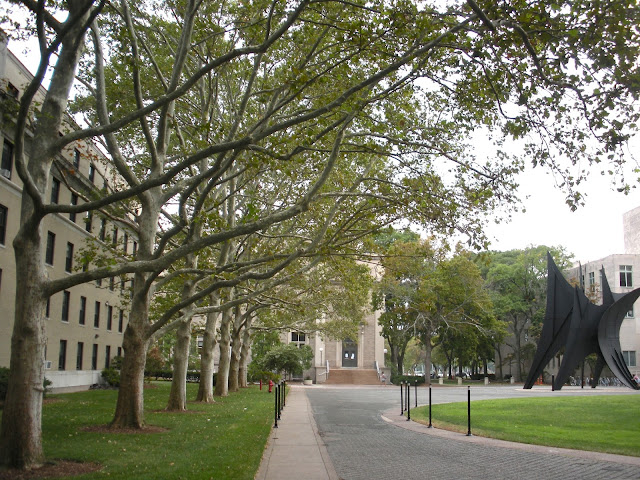 Harvard featured lots of red brick buildings, just as you'd expect (although I didn't actually see any sporting ivy). I wandered around Harvard Yard, the oldest and main part of the campus, which is a gated collection of academic buildings and residences surrounding a grassy quad.
Just outside of Harvard Yard is Harvard Square, with shops, pubs, and apartments occupying historic buildings. It had a neat vibe; despite the bustle, it felt a bit like a quaint village centre.
I made my way back to the hotel, stopping next door at Legal Test Kitchen to pick up dinner (scallops, salad, and yam fries, which were great).

On the second evening of the conference I headed out with another resident to walk the Freedom Trail, a 4-km trail (literally, there's a brick line you follow on the sidewalk) leading past historic sites in downtown Boston. I took a bus and train to Park Station at the beginning of the trail, where we met up at Dunkin' Donut and had Boston cream doughnuts before heading out (when in Boston...also, we don't have Dunkin' Donut in Canada, and I wanted to see how their Boston cream stood up to the Tim's one I'd had two days earlier -- verdict: just as good).
Our first stop was the Boston Common, which, dating back to the 1600s, is the country's oldest public park. Though not near the scale of Central Park, it's a nice big green space to have in the centre of a bustling city. 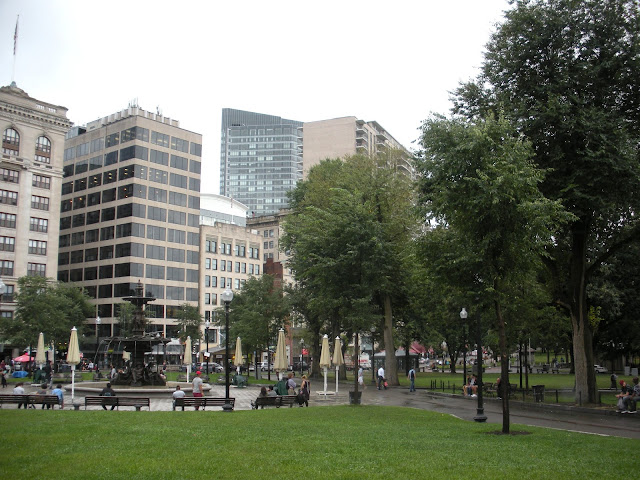 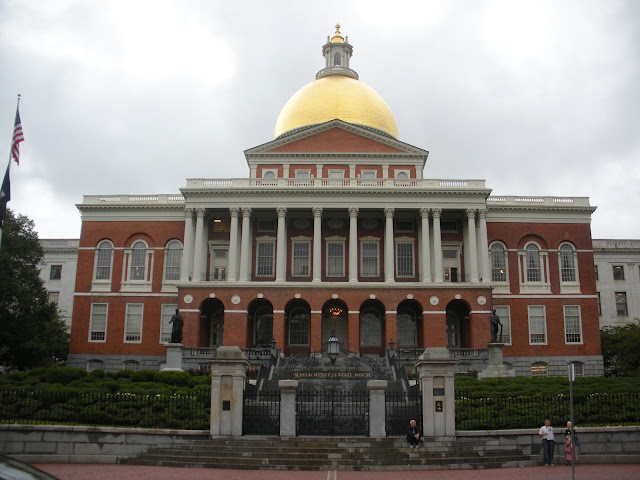 Also on the Common is the Park Street Church (1809), where women's suffrage and anti-slavery protests were staged. As it was after hours, we weren't able to enter this church (or any of the buildings; but that wasn't a big deal). 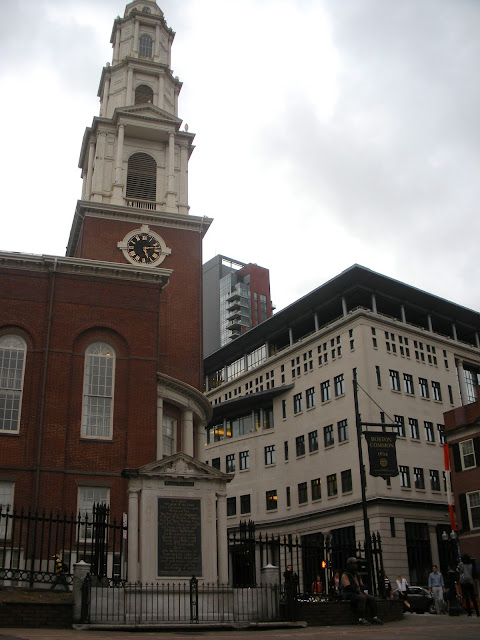 We continued through the downtown to the Granary Burying Ground (1660), an old cemetery with an estimated 5000 graves. Prominent individuals from the American Revolution, including John Hancock, Paul Revere, and Samuel Adams are buried here, amongst other notable citizens. 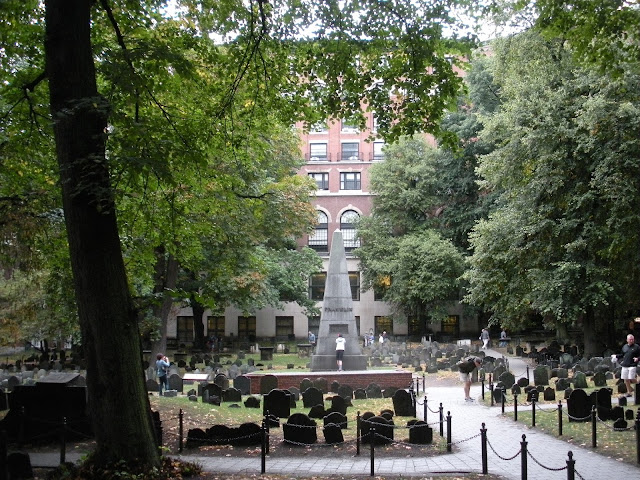 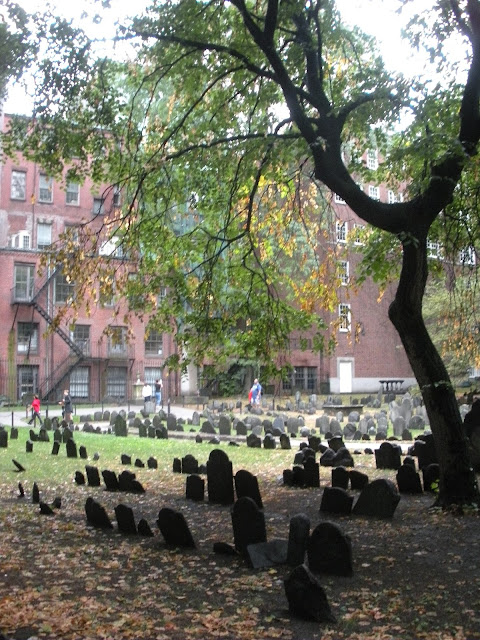 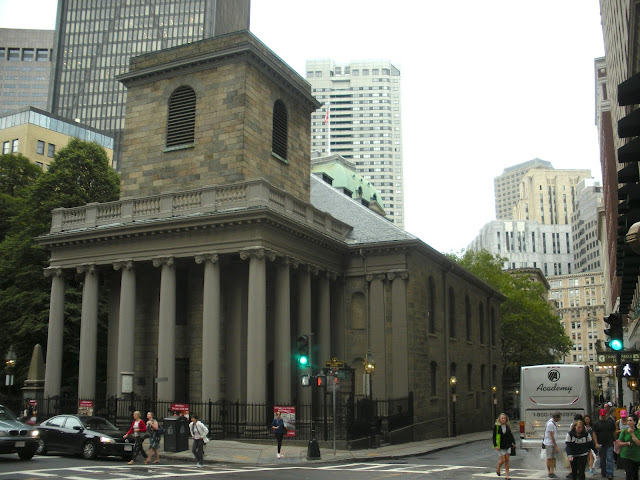 We next stopped at the Boston Latin School (1635) site; although the school is no longer standing, a plaque on the sidewalk marks its former location. Nearby is a statue (1856) of its most famous pupil, Benjamin Franklin. 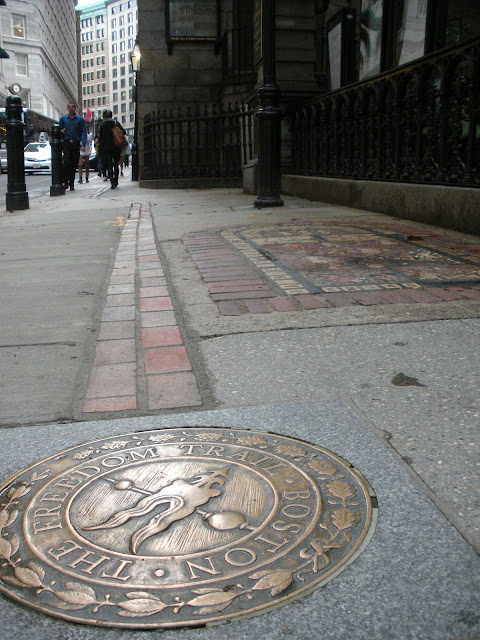 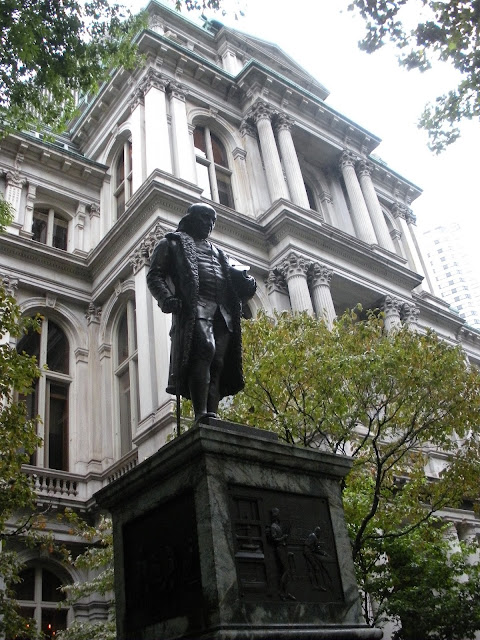 We stopped at the Old Corner Bookstore (1718), formerly the preeminent publisher in the country, being the first to publish the works of Henry David Thoreau, Louisa May Alcott, and Mark Twain. It's Boston's oldest commercial building; now housing a Chipotle. 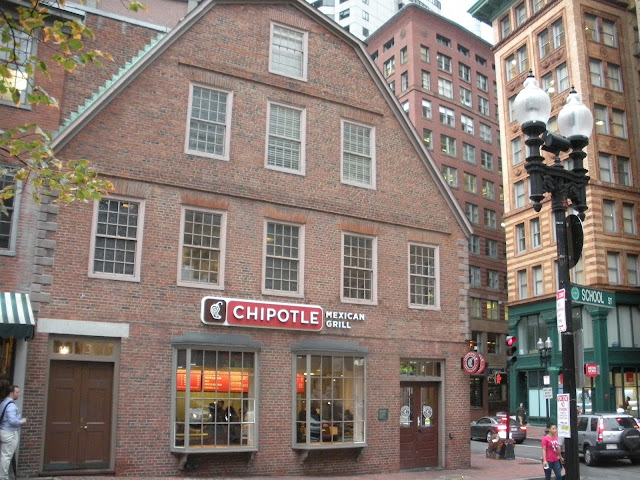 Just down the street is the Old South Meeting House (1729), where colonists first gathered to protest a tax on tea and challenge British rule. 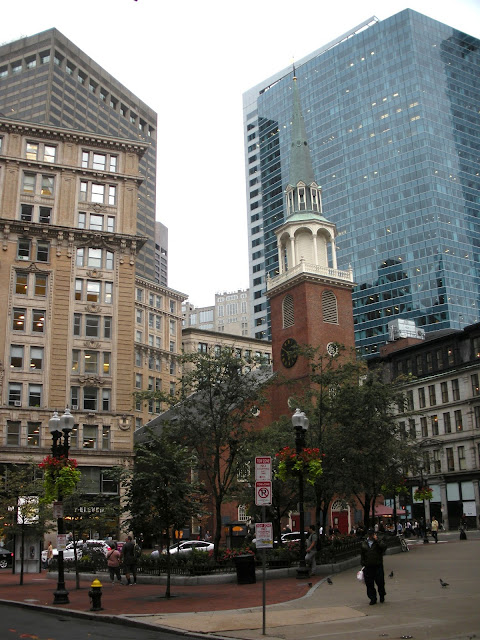 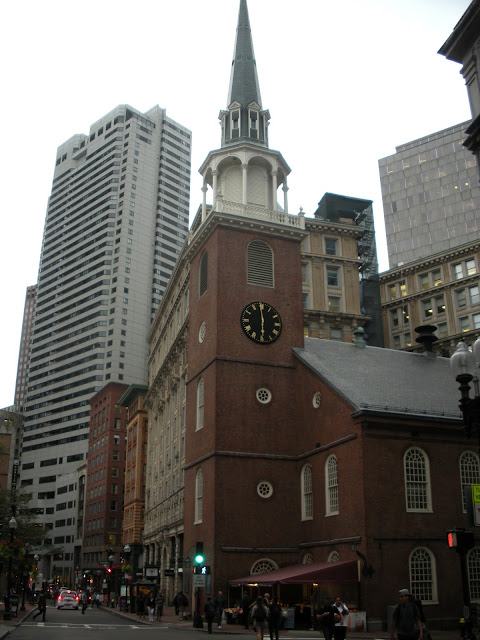 We continued a couple blocks over to the Old State House (1713), the former seat of government where some key events in the American Revolution took place. A lot of people seemed to be coming in and out of the Old State House, which we realized was because its ground floor has been converted to a subway entrance. I thought this characterized what I find so neat about Boston -- the melding of old and new. 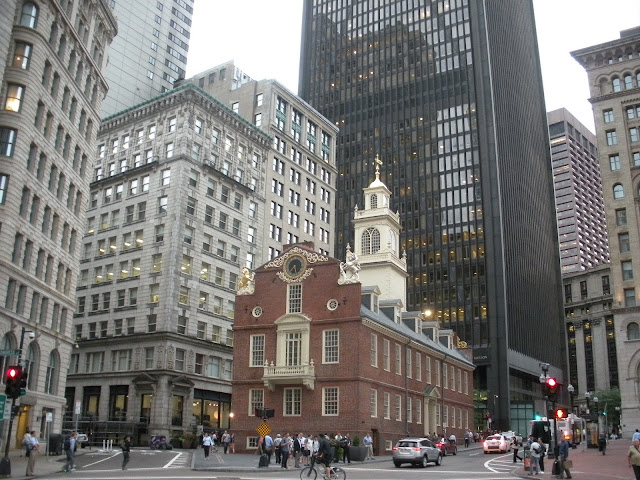 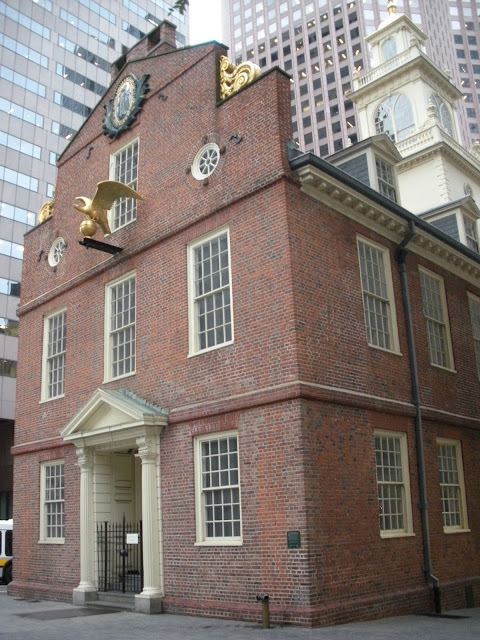 On the sidewalk outside of the Old State House is a plaque marking the location of the Boston Massacre (1770), where a skirmish broke out between British soldiers and Boston locals, culminating with the soldiers opening fire and fatally wounding five Bostonians. News of the massacre propagated anti-British sentiment in the colonies. 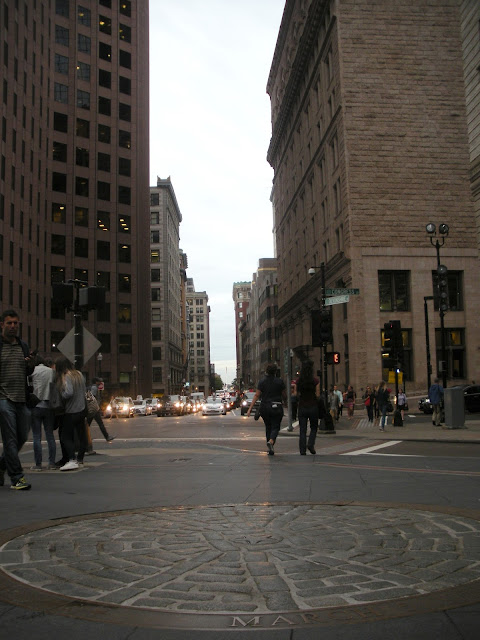 We stopped at Faneuil Hall (1741), a beautiful old red brick building that served as a meeting hall and marketplace. Within this building the doctrine of "no taxation without representation" was set. Although the visitors' centre was closed, we browsed the souvenir stalls on the main floor. 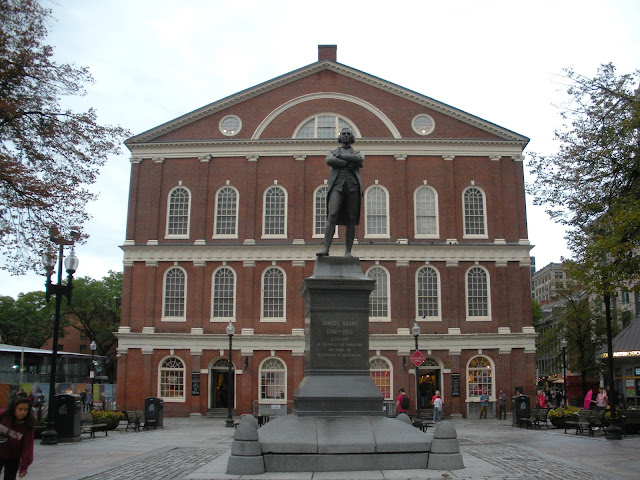 We continued over to the North End, the city's oldest residential neighbourhood (and its Little Italy). The maze of cobble-stoned streets and old buildings housing shops and restaurants at street level and apartments above, with interesting architecture and fire escapes (including a spiral one), was fun to explore. 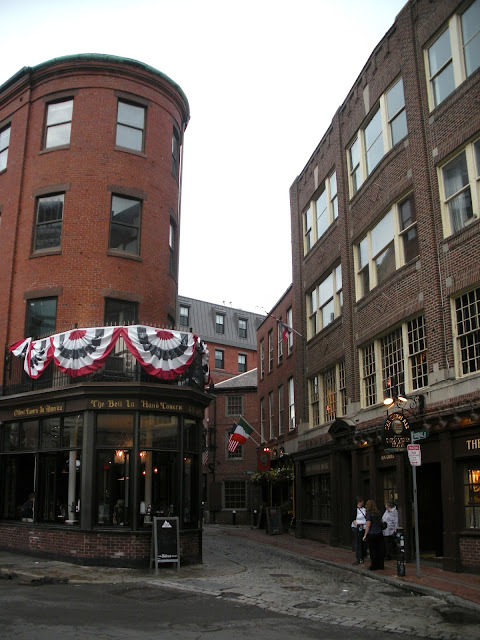 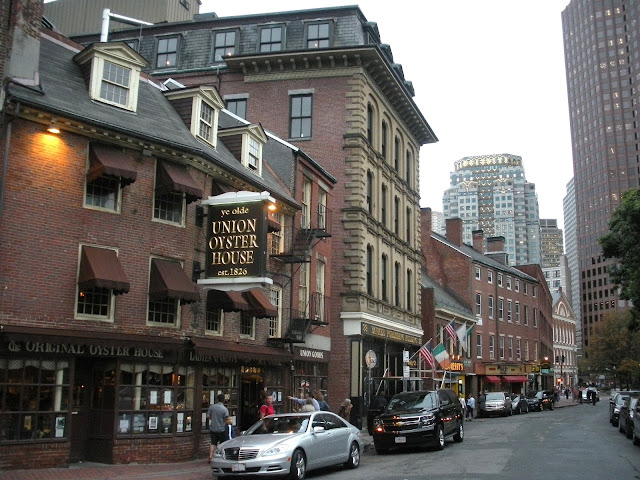 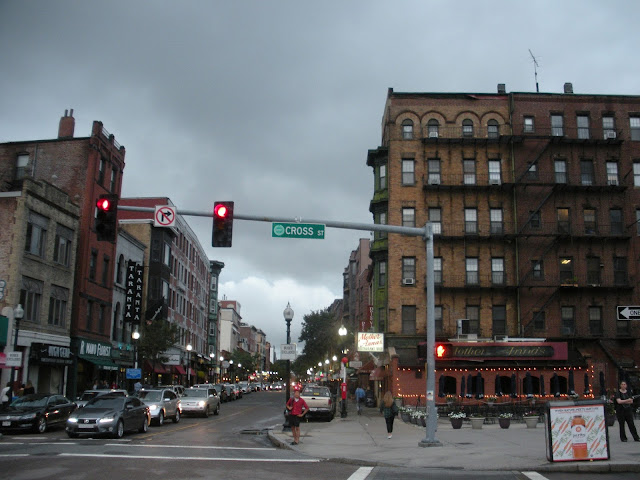 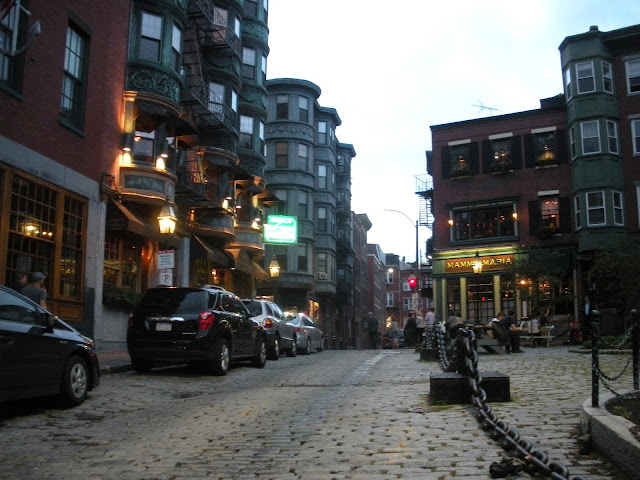 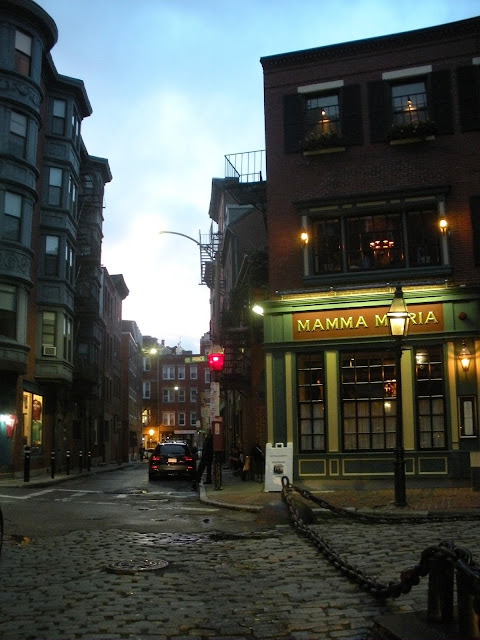 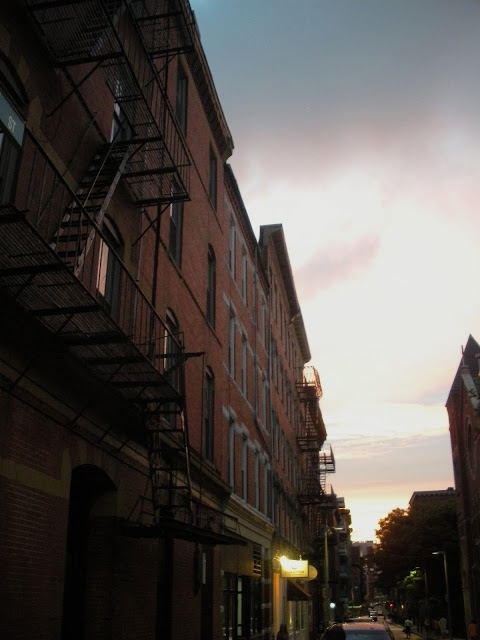 We found the two Freedom Trail sites in the North End neighbourhood: Paul Revere's House and Old North Church. Paul Revere's House (1680) is the oldest remaining structure in downtown Boston and has been restored as a museum. Old North Church (1723), Boston's oldest church, is where Paul Revere instructed two lanterns be hung in the steeple to signal that the British army was arriving by sea. Outside of the church is a statue of Paul Revere on his "midnight ride", which he embarked upon on the same night, to alert the colonial militia in surrounding towns that the British were arriving.
We decided to skip the last couple Freedom Trail sites, as they were a ways off and it was getting dark. We headed south along the harbour and stumbled across The Boston Sail Loft, a cosy little diner built on stilts above the water. The menu posted outside advertised their Monday night lobster special, so we figured we'd give it a go. Seafood is big in Boston, so we decided to go all out with clam chowder, mussels, and lobster. They gave us bibs to wear and everything; it made for a great end to our last evening in Boston.
The next day the conference wrapped up in the early afternoon, and I headed to the airport to fly back via Ottawa. All in all, it was a wonderful few days, and I'm so grateful to have had the opportunity to go!
Email ThisBlogThis!Share to TwitterShare to FacebookShare to Pinterest