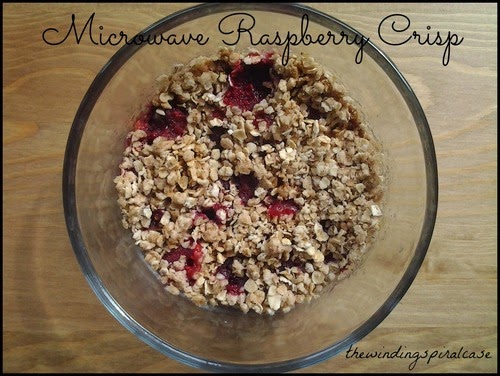 One of my favourite desserts is fruit crisp. In the fall I love apple crisp — the nutmeg and cinnamon aromas that fill the house while it’s baking and the tang of the apple that goes so well with the sweet topping. Right now however, a berry crisp seems more in-keeping with the season (though since I use frozen berries this could be made any time of the year).

This single-serving recipe takes just 5-10 minutes to prepare and “bake” in the microwave. It’s perfect to satisfy a sweet tooth without making a big crisp (that sits in the fridge and becomes un-crispy). I prefer the recipe with apple, as it is more moist and goes better with the cinnamon and nutmeg in the topping, but raspberry crisp is a close second.

Put the fruit in a microwavable bowl. In a separate bowl mix the topping ingredients. Spread the topping on top of the fruit. Microwave for 2 - 2.5 minutes (raspberry — beware of burning since less moist!) or 5 min (apple — until apples are soft and topping is crispy).
(apple crisp: 415 Cal, 79 g carbs, 10 g fat, 6 g protein, 8 g fibre, 47 g sugar)
Email ThisBlogThis!Share to TwitterShare to FacebookShare to Pinterest