It's my mom's last weekend in Alberta and we made the most of a crisp fall-like Sunday to check out St Albert, a small city twenty minutes northwest of Edmonton. Our first stop was the Grain Elevator Park, where we were met at a 1920s replica train station by a friendly university student on her final weekend of touring visitors around the restored elevators (open until Labour Day each summer).

We were the only visitors on this chilly morning and had an interesting time hearing from our guide about the history of grain trade in the area. We first toured the green 1929 elevator.
Back in the day, a farmer dropping off grain (typically wheat) drove his truck onto a scale on the ground floor of the elevator, where the grain was weighed and assessed for quality.
Once approved, the grain was dumped through a grate into a pit beneath the ground.
The grain was then scooped up by cups on a moving belt (the "elevator") and lifted to the top level of the building, where it was dumped out by a spout leading to one of several storage bins.
The grain was stored in these bins until a train came by to collect it, then dropped through a spout onto a scale to be weighed, before being scooped up again by the elevator, and finally dropped down into the waiting train.

The white 1906 elevator was similar, but featured a wheat-delivering wagon instead of a truck. 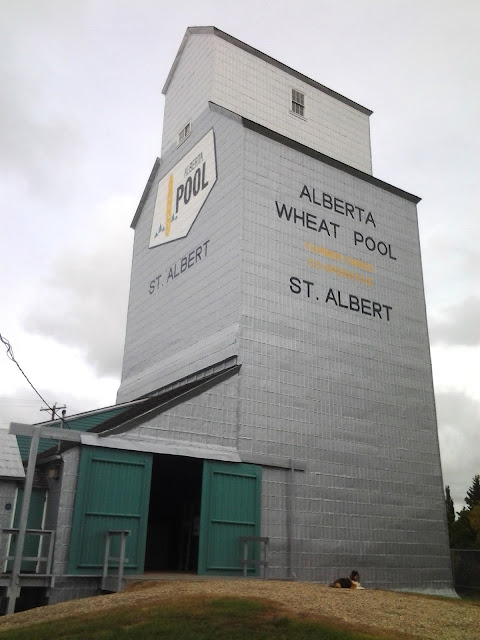 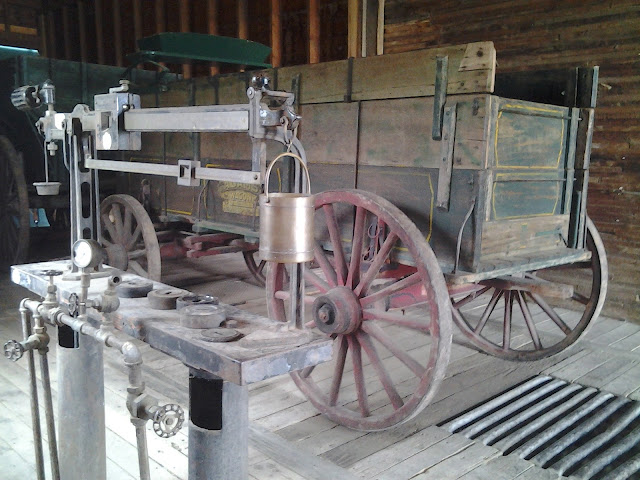 From the Grain Elevator Park, we headed into the little downtown, which was quiet on this holiday weekend. We walked around the St Albert Place (city hall) grounds, alongside the Sturgeon River. 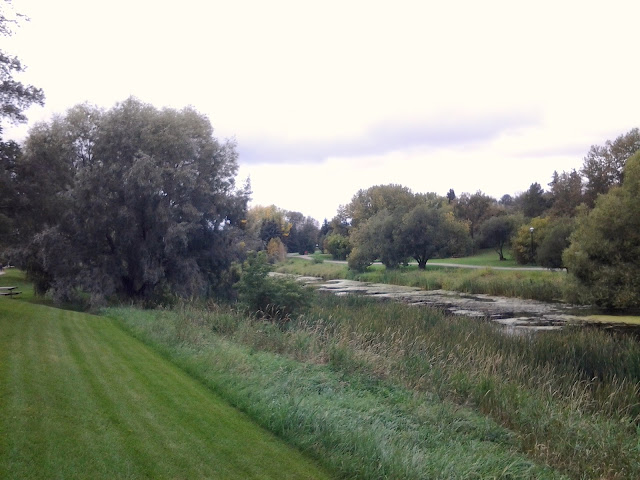 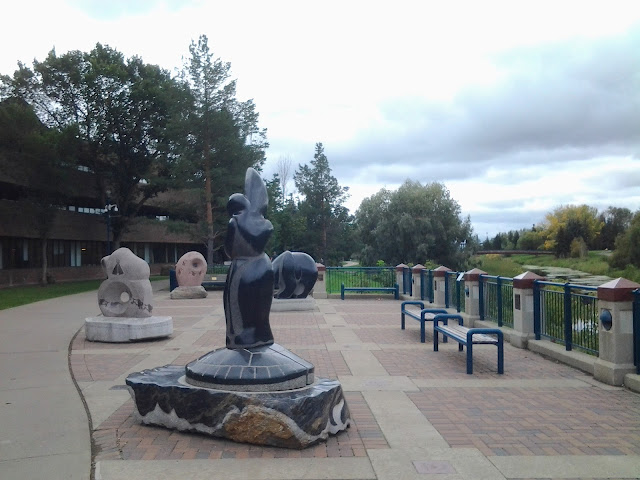 We stopped for a picnic lunch at St Albert Botanic Park, a five-acre volunteer-maintained garden. The last time I visited St Albert the garden was booked for a wedding (as it often is in summer months -- check their calendar before you visit), but on this overcast day we were amongst just a few visitors wandering the grounds. 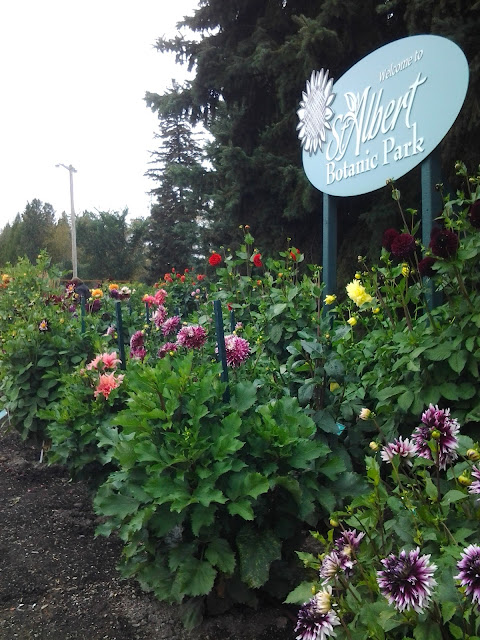 For being late in the season, there were still quite a few flowers in bloom. One highlight was the large dahlia garden, with some obscure varieties, all neatly labeled. 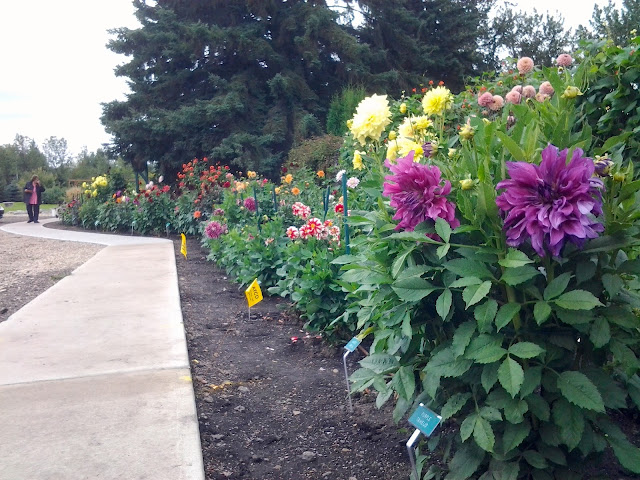 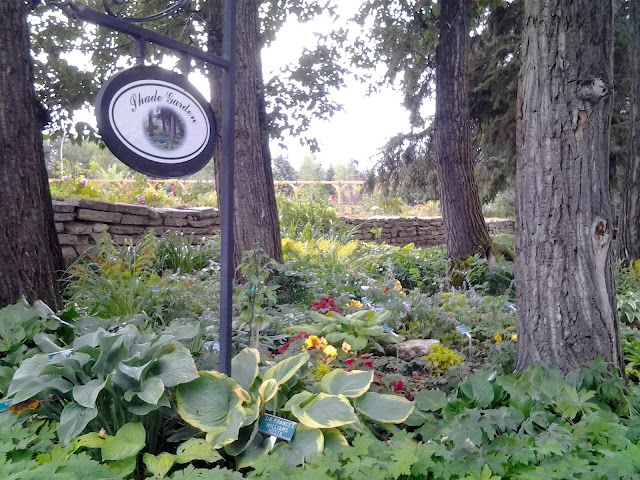 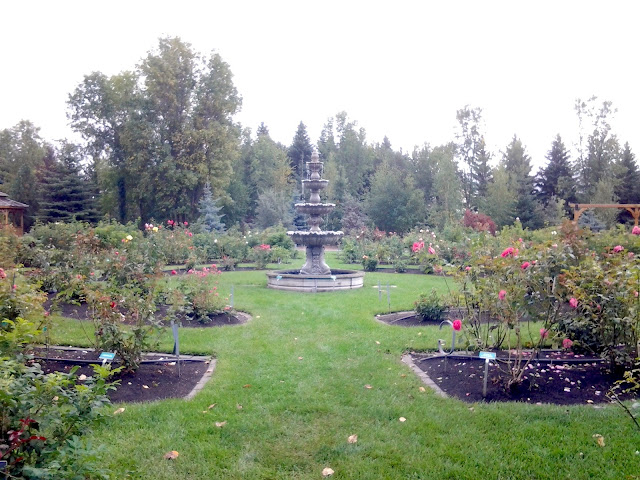 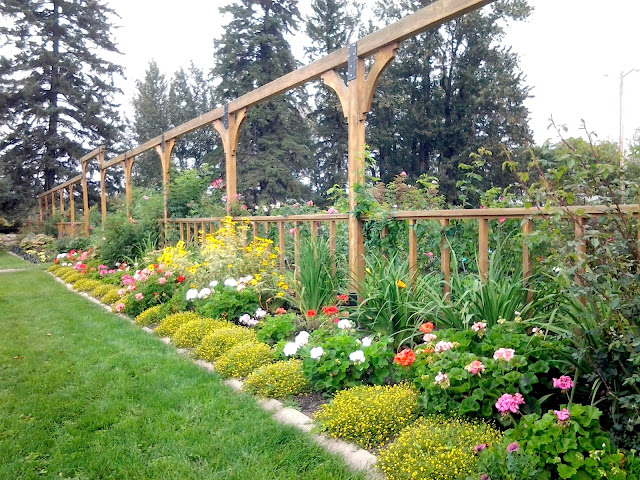 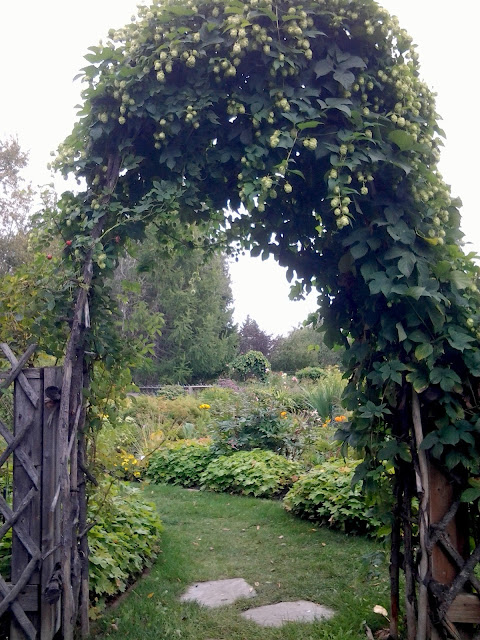 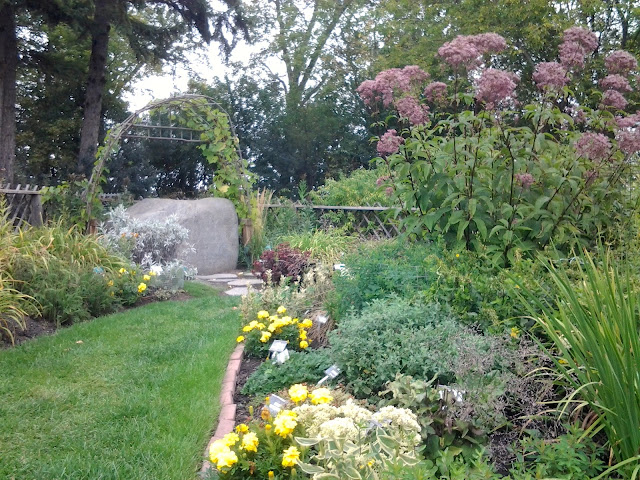 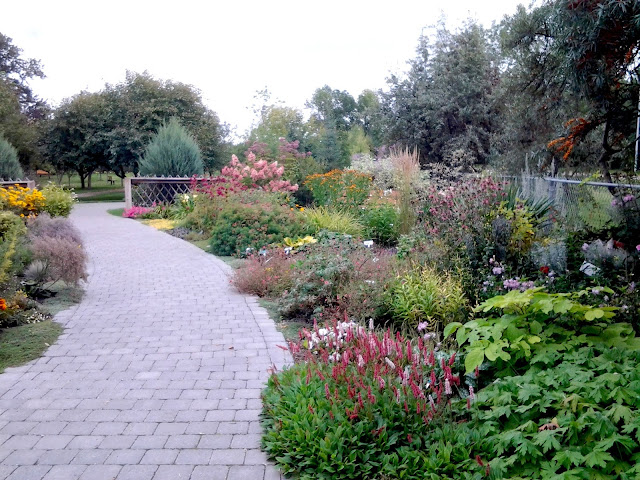 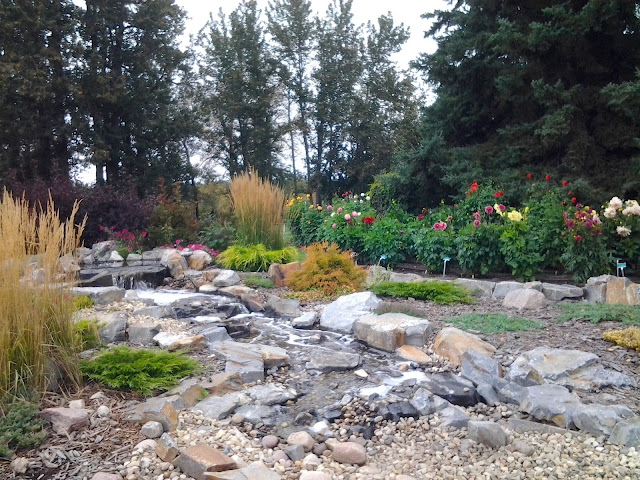 If you ever find yourself in the area, I'd recommend a visit to the Botanic Park. It's free and a nice place to take a stroll or have a picnic. I especially appreciated how well the plants were labelled -- my new favourite being the delicate vibrantly purple Hewitt's Double meadow-rue (Thalictrum delavahi). 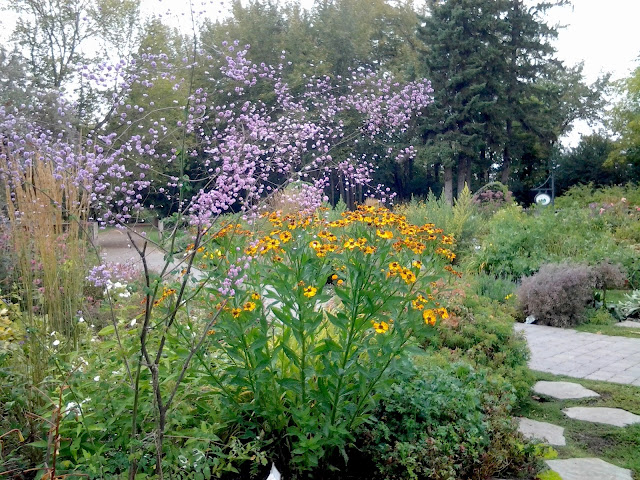 Our final stop was Lois Hole Centennial Provincial Park, a large park on the shores of Big Lake, just west of St Albert. We followed a fantastic boardwalk through the wetlands and walked out onto the pier overlooking the lake. 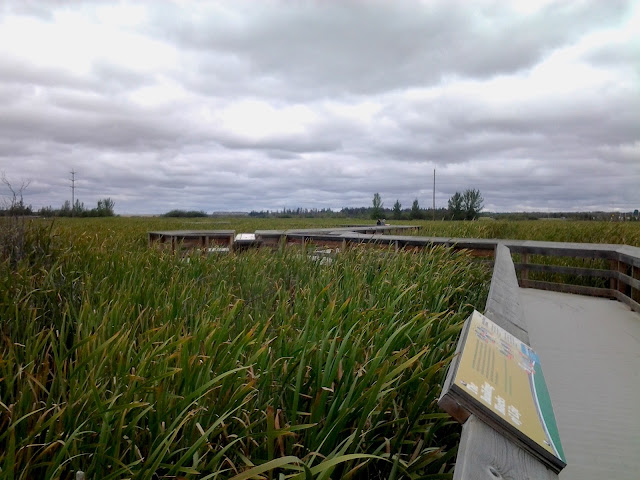 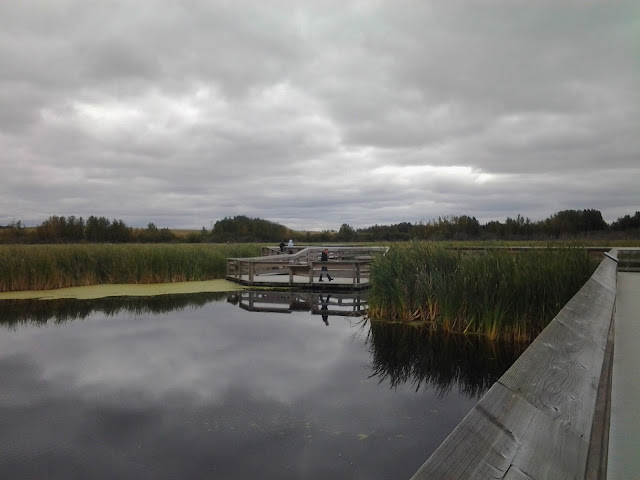 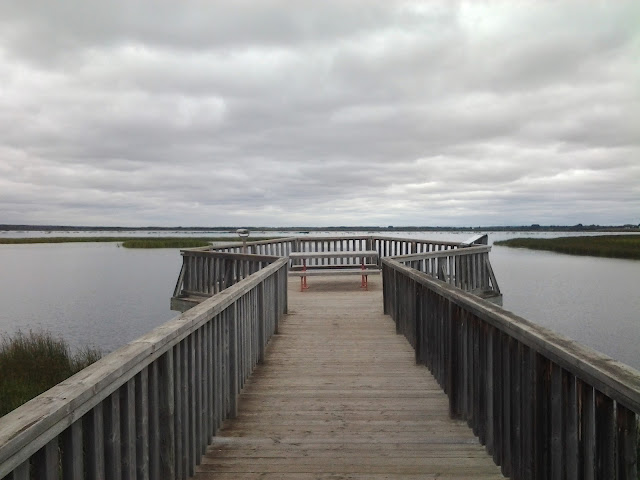 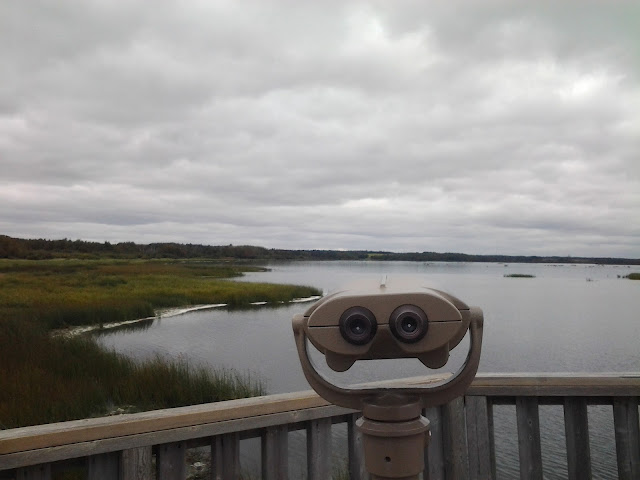 As we learned from signs along the boardwalk, the park is an important bird habitat, though just a few little guys were out during our visit. 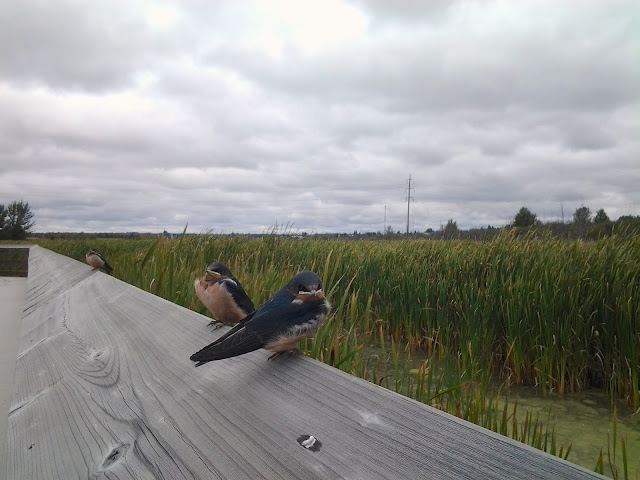 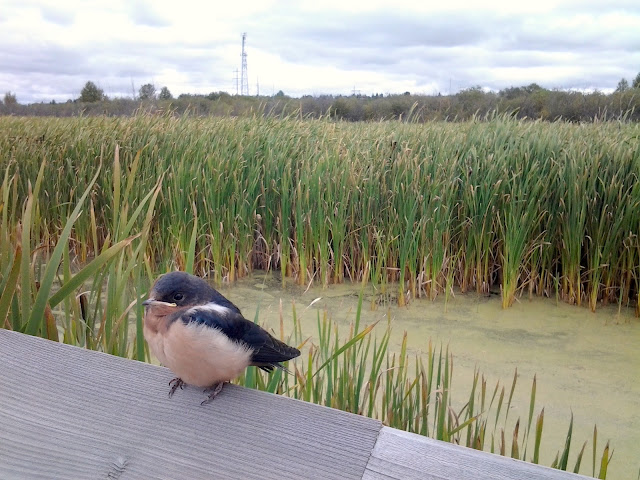 Overall St Albert made for a nice little day trip!
Email ThisBlogThis!Share to TwitterShare to FacebookShare to Pinterest